Whispers of the Apoc: Tales From the Zombie Apocalypse 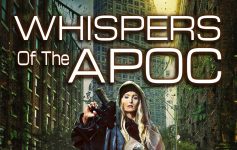 Whispers of the Apoc: Tales From the Zombie Apocalypse (Volume 1)

No one knew how it started.

The world that took thousands of years to build, fell in just a few weeks. These are the stories of those who were strong enough, or lucky enough, or crazy enough to survive.

“From Dead to Dust”

In my novel The Romero Strain, J.D. Nichols never discovered what happened to the seven 69th Infantry Regiment armory soldiers sent to the roof by their base commander Colonel Harland Travers. The mystery of their whereabouts was also not addressed in the sequel, The Romero Strain: The Dead, the Damned, and the Darkness.

Tannhauser Press was kind enough to include it in their anthology. In this stand alone short story — before J.D...

The Romero Strain had swept across the globe, turning most of its inhabitants into the living dead...