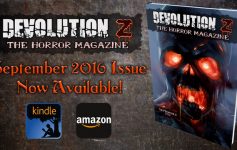 Very happy to have another short story published in this magazine with a revenge from the grave tale.

“The Other Self”: In 1975, independent contract killer Roberto Umberto and his pregnant wife get murdered in their Brooklyn home. With his last dying breath he swears revenge on everyone involved. Ten years later, Roberto Umberto returns from the dead to keep his promise in a bloody rampage that takes him from Manhattan to Long Island.

Roberto quickly reloaded as two more Gallinari henchman came out the front door. He dropped them before they could get a clear shot and then entered the house, heading to the dinning room. Two more charged at him, having come from the way of the dinning room, firing as they did...